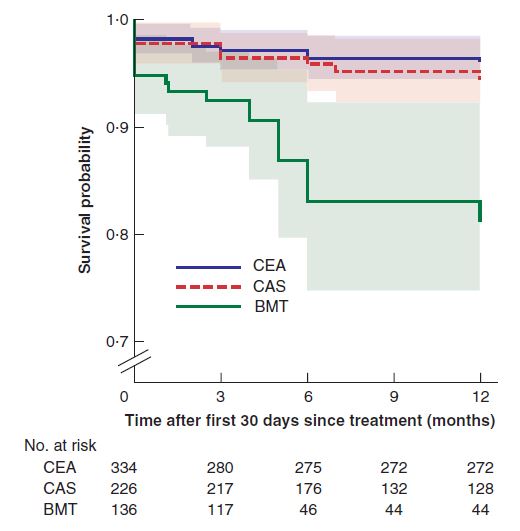 Background. Guidelines recommend treating patients with an internal carotid artery near occlusion (ICANO) with best medical therapy (BMT) based on weak evidence. Consequently, patients with ICANO were excluded from randomized trials. The aim of this individual-patient data (IPD) meta-analysis was to determine the optimal treatment approach. Methods. A systematic search was performed in MEDLINE, EMBASE and the Cochrane Library databases in January 2018. The primary outcome was the occurrence of any stroke or death within the first 30 days of treatment, analysed by multivariable mixed-effect logistic regression. The secondary outcome was the occurrence of any stroke or death beyond 30 days up to 1 year after treatment, evaluated by Kaplan–Meier survival analysis. Results. The search yielded 1526 articles, of which 61 were retrieved for full-text review. Some 32 studies met the inclusion criteria and pooled IPD were available from 11 studies, including some 703 patients with ICANO. Within 30days, any stroke or death was reported in six patients (1.8 per cent) in the carotid endarterectomy (CEA) group, five (2.2 per cent) in the carotid artery stenting (CAS) group and seven (4.9 per cent) in the BMT group. This resulted in a higher 30-day stroke or death rate after BMT than after CEA (odds ratio 5.63, 95 per cent c.i. 1.30 to 24.45; P = 0.021). No differences were found between CEA and CAS. The 1-year any stroke- or death-free survival rate was 96.1 per cent for CEA, 94.4 per cent for CAS and 81.2 per cent for BMT. Conclusion. These data suggest that BMT alone is not superior to CEA or CAS with respect to 30-day or 1-year stroke or death prevention in patients with ICANO. These patients do not appear to constitute a high-risk group for surgery, and consideration should made to including them in future RCTs of internal carotid artery interventions.

Type
Journal article
Publication
British Journal of Surgery. 106(6)
Click the Cite button above to demo the feature to enable visitors to import publication metadata into their reference management software.